A family was nearly poisoned by dangerous fumes and their home flooded, after a replacement boiler was wrongly installed in the property.

And now 52-year-old woman, Korrine Boaro, is encouraging homeowners to ensure gas fitters are qualified and registered with Gas Safe. When the engineer was hired, she didn’t consider the prospect that he wouldn’t be Gas Safe registered and this could have been a fatal mistake. 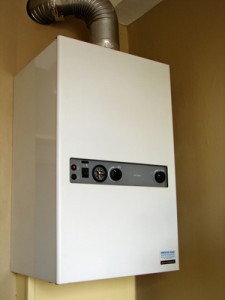 Not long after the replacement boiler quotes was installed the family started to suffer from headaches and tiredness; classic symptoms of the deadly carbon monoxide poisoning.

Carbon monoxide is an odourless and colourless gas, almost undetectable. Poorly fitted boilers and old systems can often cause monoxide leaks and around 50 people in the UK die every year as a result.

As well as the monoxide leak, the boiler fitter left the property in a mess and water leaked through a ceiling to ruin both the upstairs and downstairs carpet.

Not only has this caused a huge inconvenience for the family, but the couple had to spend £2,500 to fix the faulty boiler and the same again on carpet and ceiling repairs as well as electrical rewiring.

A qualified contractor later found that the cowboy engineer did not install the flue correctly and the gas fire wasn’t connected properly.

Mrs Boaro said: “We could have easily been killed by the fumes, which you can’t smell.

“Thankfully the rooms are quite tall and we often have the doors open. If we’d kept them shut, we could have died.
“People should check that fitters are Gas Safe registered. I just hope this doesn’t happen to anyone else.”

According to an investigation of the northwest, Bolton was found to be the area most at risk from faulty gas appliances. 8,000 systems have been checked in the last 12 months with 10% unsafe in the Bolton region.

This is why it’s ever-important to ensure your replacement boiler is fitted by a vetted reputable and Gas Safe registered professional.

Using our service will guarantee all of the above, and only the very best contractors are allowed onto our books.

Remember, replacing your boiler will mean:

Complete our quick replacement boiler quotes form and hear from up to four professional contractors within minutes. You’ll receive free quotations for the work you want completed, giving you the ultimate choice for your new boiler.

Get up to 4 Free Quotes from Combiboiler.net

About the Author: Luke